Congratulations! You’ve finally reached the point in your life where you have to choose between two instruments. Whether you’re making this life-altering choice for you or for somebody else is out of the equation.

But to get straight to the point, just remember this: If you want to become the next Kenny G, choose the Saxophone. If you want to sound like an elephant that’s calling for its young, then choose the trombone.

Regardless, both instruments are beautiful and revered in their own right and that’s why we want to give you a fair and impartial comparison between the two to help you make the best choice.

By the time you’ve reached the end of this article, you should be able to know the answers to the following:

What Are Saxophone and Trombone?

The Saxophone and Trombone are some of the most recognizable instruments of the wind section. They might look similar thanks to being built with the same material which is brass.

But the thing is, they actually belong to two distinct sub-categories of the wind instruments: the woodwinds and the brass.

From the name itself, Woodwinds are instruments that are traditionally made from wood and are played by blowing air through an opening. Nowadays, it is mainly made out of metal and not just wood.

However, it has retained the way in which it produces sound by splitting the air that was blown into them on a sharp edge, such as a reed or a fipple.

Examples of woodwinds are:

On the other hand, brass instruments produce sound by responding to the external vibrations applied to the vibratory body which has a harmonic likeness. In this case, the player’s lips vibrate against the mouthpiece and the said instrument will respond to it through its tubes.

Some fine examples of brass instruments are:

Just take a moment and watch this clip to understand what the brass section is all about:

. @machinegunkelly digging the music, I had to play along pic.twitter.com/pofnOA0aLi

Question: Doesn’t the saxophone physically looks out of place in the woodwind section? Well, according to Organologists, or individuals that are experts in musical instrument classification, an instrument should be defined as to how it creates its sound now from the material that it is made of.

In this case, while the Saxophone is typically made from brass, it produces sound by the vibration of a single reed. A prime example of a woodwind instrument.

Conversely, there are also wind instruments that are made from wood but are classified as brass instruments. Examples of this are cornet, serpent, alphorn, and the Australian Aboriginal Instrument called Didgeridoo.

And now for the main event, we will finally see the differences between the Saxophone and the Trombone.

But before anything else, we need to remember that the words Saxophone and Trombone are just general names that encompass their respective families.

Meaning, not all Saxophones are similar, and the same can be said to the Trombones. This is because each instrument is further sub-categorized according to its voice type.

The four common types of saxophones are Soprano, Alto, Tenor, and Baritone. The most well-known and the one your mind will automatically think about should be the Alto sax. It’s the one that produces a cool, jazzy, and seductive sound out of all the instruments.

On the other hand, the most common line-up of Trombones is the Tenor, Bass, and Alto trombone. You probably know about this already, but if you’re unsure, then: yes, the trombone is the one that is played by a sliding mechanism.

The Sax and The Bone

Without further ado, let’s take a look at the difference between the Saxophone and the Trombone.

A cone essentially refers to any wind instrument that has a thinner diameter near the mouthpiece and gets wider and wider as it approaches the bell.

On the other hand, a cylindrical design is pretty much even throughout the length of its body and only expands when it finally reaches the bell.

Another key difference between the two instruments is the mechanism in which they change their pitch. Saxophones use keys that can be controlled by a player’s fingers while Trombones have a sliding mechanism.

Here’s the part where they really pull apart from each other. As mentioned in earlier sections, the saxophones and trombones are just general terms that refer to their families and are further subdivided according to their voice types.

These variations make the instruments very dynamic and difficult to compare. So, to start off, let’s just say that both instruments are tuned to the key of B♭.

Another common ground they have is that both instruments get smaller as their range gets higher and higher. While there’s hardly any difference in terms of design and construction in the part of the trombone, the changes are more visible in saxophones.

Not only do they get physically smaller, but they also lose their distinctive curve as their range gets higher culminating in a straight conical shape of the Soprano saxophone.

To avoid getting lost, here’s a table indicating the ranges of the Saxophone and the Trombone according to their most common variants:

Of course, these instruments do not sound the same and both have their own strength and unique feel to their own sound.

This is the reason why Trombones are commonly associated with symphonic orchestra whereas the Saxophones immediately come to mind when talking about Jazz.

Trombones are known for their warm, rich, and drawn-out sound quality. Its pure sound makes it perfect for playing music that’s commonly referred to as noble and majestic.

In the future, you can also use these techniques to record your saxophone at home to hear the sound you’re producing.

In a more technical sense, a saxophone’s sound can be described as sharp and reedy. It may sound too strong and aggressive but skilled players can mellow it down.

Now, let’s put all the technical aspects aside and focus on the most important factor: user experience.

In Music, the embouchure refers to the manner in which a musician applies their mouth to the mouthpiece of a wind instrument to produce sound. It is done by combining and manipulating the shape of lips, facial muscles, tongue, or even teeth to perfectly play the instrument.

For saxophones, the embouchure is pretty much straightforward: the player must only wrap their mouth and lips around the mouthpiece in a specific formation to allow the reed to vibrate with the air.

Once a saxophone player figures this out, it remains relatively easy and consistent. Although it takes lots of practice to create an embouchure that can produce the ideal sound.

The trombone, as a brass instrument, requires the player to put its cup-shaped mouthpiece against the lips and buzz them at varying frequencies to play certain notes. To learn more about it, visit this article for an informative guide on how to correctly play the trombone.

The saxophone is a heavy instrument. The good thing is, it comes with a neck strap that helps hold the weight.

Beginners should find this quite helpful in handling the weight while establishing good posture and hand position.

With the trombone, much of the instrument’s back end rests on the left shoulder and the hands, while arms support the rest.

In terms of ergonomics, the Saxophone can cater to a much larger group of people thanks to it being key-operated.

Smaller-sized players with shorter arms should find some issues regarding the weight and arm extension requirements to play the trombone.

This is because holding the trombone up and reaching for the slide positions can be quite burdensome. The player’s left shoulder should be able to support the weight that ranges somewhere between 1.3 Kg and 3 Kg while the right arm should be able to reach enough to play in the higher positions like 6th and 7th.

In comparison, the saxophone is much easier to handle. With the handy-dandy neck strap, most of the weight is transferred evenly to the player’s body. The fact that it is also held closer to the body makes it more comfortable to hold during long periods of time, even with shorter arms.

Here’s a real deal-break for some: Saxophones are just more expensive than the Trombones within the comparative levels of making.

The key here is the number of parts that each instrument has in its body. The trombone only has about four main parts not including the mouthpiece whereas the saxophone has around a hundred parts each, most of which are movable and requires constant attention and maintenance.

In short, the worst that can happen to a trombone is bending the slide which would render it virtually unplayable. In comparison, mishandle a saxophone just once and you’ll be on your way to get a new saxophone. You can read this article where we put together an alto saxophone for you so you can learn more.

And we’ve not even started on the necessary expenses for the instrument’s maintenance and ability to withstand the weather. (Hint: the Trombone is still better in this department.)

In terms of versatility and number of playing opportunities, both instruments are exceptional, to say the least. But the trombone would still have the edge over the Saxophone.

Saxophones are not orchestral instruments like trombones and are rarely found in wind orchestras. So this should automatically remove one component from the formula.

Although many modern and postmodern composers did include the Saxophone in their symphonies (hello Gershwin, Shostakovitch, and Rachmaninoff!) it is nowhere to the thousands of pieces that the trombone takes part in.

Still unconvinced? Check out this performance by Bennie Green as he makes love to his trombone.

Both instruments are quite popular in jazz, reggae, and classical settings, group opportunities are slightly limited for saxophone in later years.

So, If you see yourself being a professional orchestra musician, saxophone might not be the best option for you. But if you decide otherwise, these wireless mics might come in handy for your saxophone.

To sum up everything, just remember these pointers when you’re about to make your choice between the two instruments:

Do you have the money and want to play your heart out as a soloist? Choose Sax.

If you’re a little tight on cash at the moment but want to make it as a concert musician? Then Trombone is the way to go.

Just make sure that you’re as happy as this kid if you do make the choice.

Deciding between two instruments is always a good problem to be had. Not many people will experience that opportunity, so you’ll have to be extremely thankful for that privilege. Whatever your choice is, just practice like crazy and play your hearts out.

If you have any more questions, just put them in the comments section below and we’ll find the time to answer them for you. 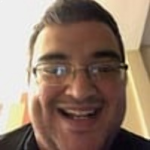 Juan Rangel is a musician and educator in the Austin, Texas area who specializes in Jazz with an emphasis on saxophone and flute. He obtained his Bachelors in Jazz Studies in 2014 and has enjoyed performing in various settings to wide audiences. After graduating, he has been influencing musicians of all ages and honing his musical craft. When not practicing or teaching, he is also writing either music or prose.